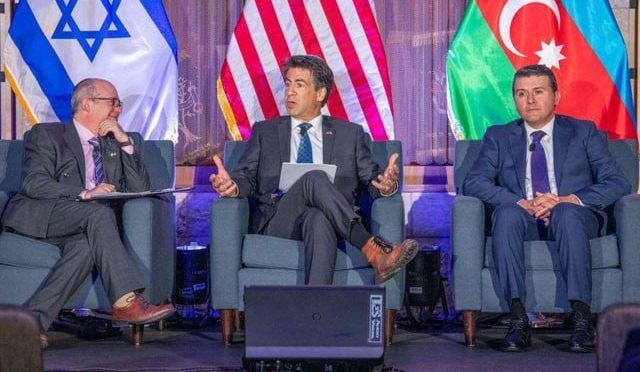 Baku: (Web Desk) The parliament of the Muslim country of Azerbaijan approved the opening of an embassy in Israel.
According to the international news agency, Azerbaijan has decided to open its embassy in Israel after a month of talks, but the embassy will be opened in Tel Aviv, the country’s second largest city, instead of the main Israel’s disputed city of Jerusalem.
The Israeli city of Tel Aviv already has a tourism office and an office of Azerbaijan’s trade representative, and the embassy is likely to be opened in the same office first.
It should be remembered that the Israeli embassy has been in the capital of Azerbaijan Baku since 1993 and that the two countries have 30-year relations, but Azerbaijan did not open the embassy there.
Israeli Prime Minister Yair Lappad called Azerbaijan an important partner country and said that he welcomes this decision. Azerbaijan is a country in the Muslim world where a large number of Jews live, and we have had an embassy there for 30 years.
It should be noted that 4 Arab countries recognized Israel for the first time and restored diplomatic and trade relations through the mediation of former US President Donald Trump, with more Muslim countries also following -renewal of diplomatic relations.

I am writing that I will not resign from Punjab and Khyber Pakhtunkhwa, Karachi will be mayor: Bilawal BhuttoSEDI News

Political rivals clashed in the soccer World Cup, the US defeated IranSEDI News