Ashok Gehlot vs Shashi Tharoor? Nomination for the post of Congress President will start from today SEDI News

The main contest for the president’s post is believed to be between Ashok Gehlot, the alleged first choice of the Congress high command, and Thiruvananthapuram MP Shashi Tharoor, who has been demanding a change in the party. 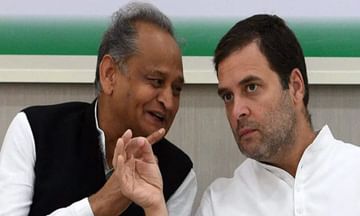 Congress The process of nomination for the post of President of the State is starting from Saturday, September 24. It is believed that the main contest for the post of Congress president will be between Ashok Gehlot, the alleged first choice of the party high command, and Thiruvananthapuram MP Shashi Tharoor, who has demanded a change in the party. Meanwhile, the Chief Minister of Rajasthan Ashok Gehlot Said that the debate of one person, one post is unnecessary and he wants to serve the people of his home state for life.

Gehlot announced that he would contest the election for the post of Congress President. Talking to reporters here, he said that his statement of wanting to serve the people of Rajasthan is being interpreted in different ways. On the principle of one person, one post of the party, Gehlot said that there is such talk in the media that he does not want to leave the post of Chief Minister of Rajasthan.

This debate is unnecessary, Gehlot said after visiting the famous Sai Baba temple here. I am silent. According to the media, I do not want to leave the chief minister’s post. He said, but I say this with full confidence, I say this even today and will stick to it even after filling the form (for Congress President election), I am from Rajasthan and I want to serve the state for life. . What’s wrong with saying so? People interpret it differently. The media interprets it differently.

The decision of Rajasthan is in the hands of Sonia Gandhi

Congress leader Rahul Gandhi In line with the reforms decided at the Udaipur Chintan Shivir on Thursday, he had backed the concept of one man, one post and also indicated that he was not in the race for the post of party president. Earlier in the day, speaking to reporters in Kerala’s Kochi, Gehlot made it clear that he would contest for the party’s president’s post and said that any decision on the head of the Rajasthan government after him would be taken by the party’s interim president Sonia Gandhi and Rajasthan. Congress in-charge Ajay Maken will be taken for this. There is speculation that the Thiruvananthapuram MP Shashi Tharoor K is likely to field for the post of party president.

Enrollment will start from today

Person in court in relation to housebreaking in Shawlands, GlasgowSEDI News