Astrologer sought by MNS for timing of road works in Dombivli; MNS come. Pramod Patil pinched Shiv Sena from plank As the road work has not started in Dombivli Pramod Patil has targeted the Shiv Sena by raising a banner amy 95 SEDI News 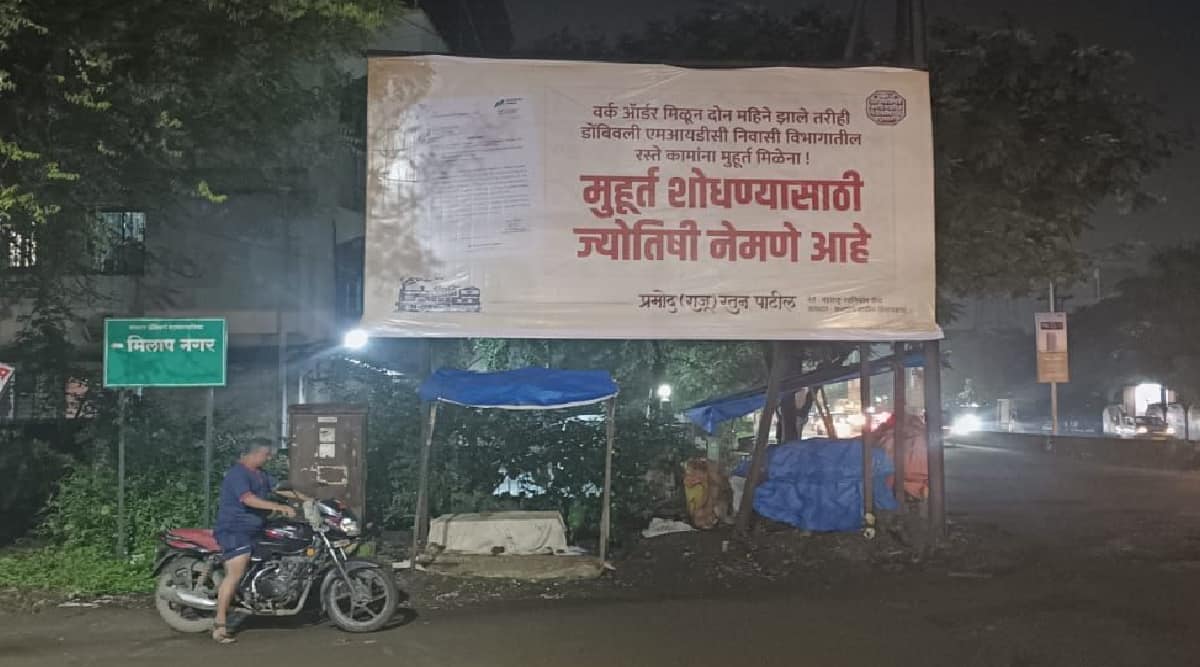 In order to start concrete road works in the residential section of MIDC in Dombivli, the Mumbai Metropolitan Region Development Authority has appointed May from Mumbai Santacruz in July. N. A. Work orders have been given to the construction company. Even after three months, the road works are not being started by the contractor. Pramod Patil has targeted Shiv Sena through placarding.

Time to start concrete road works in Dombivli MIDC residential section. For this, the process of appointing an astrologer has been started. May without getting the time for road work. N. A. As the work is not being started from the construction side, now the Muhurat will be sought after looking for an astrologer and then the contractor will be strangled to start the work on that date. Planted by Pramod Patil.

Come from this panel. Patil killed Shiv Sena without naming names. Dr. Srikant Shinde has been targeted. 110 crore funds for road works in MIDC were approved by MIDC, MMRDA, now the roads in MIDC will be completed last year. Shinde had played the board. After this hoarding, since the road works are not started even after a few months, there are ironic boards criticizing when the road works will start. Patil had planted in MIDC. eat Dr. Also from Shinde. Patil said, ‘We will show the work through actual action without doing propaganda.’ MNS’s tic was answered by displaying such a content board.

Bhumi Pujan in February
While this placarding was going on, on February 17, Bhoomi Pujan was done by the then Environment Minister of Roads in MIDC, youth leader Aditya Thackeray. These works will now be done dynamically. Because Bhoomi Pujan is sustainable for the work, eat when the shovel is needed. Dr. Shinde has also kept the tiller, JCB with shovels, other sophisticated equipment ready for this work. So these works will be completed in time and speed and MNS who criticize these road works. Pramod Patil will have to put up plaques of our (Shiv Sena) appreciation,’ said the then Guardian Minister and now Chief Minister Eknath Shinde in the Bhumi Pujan program. Patil was assigned. At that time, she was sitting on the side. Patil replied, ‘You just make the roads bright, we will put up the boards of your congratulations without any party distinction.’ Patil had given. After two months, the road works did not start. Patil had played the board game. After this paneling, the contractor of Ambernath completed only 200 meters concreting work in MIDC within two months. MNS criticized this work. Critics of the construction sector are criticizing that special contractors are working arbitrarily.

Residential roads plight
Eight months after Bhumi Pujan, concrete road works in MIDC residential section are starting. Roads in residential areas are in bad condition. Locals are demanding to complete these works in time and provide relief to citizens, school drivers, hospital drivers. Orders to start road works in residential areas have been issued by MMRDA in July. These works are worth 48 crores. Corporation has ordered the contractor to complete these works within 18 months. Since the contractor has not started work even after two months, MNS has targeted Shiv Sena for criticism

The North East Frontier Railway is organizing additional Puja special trains to facilitate the journey of pilgrims during the Puja season.SEDI News

Prashant Bhushan made a big allegation on the Election Commission, said – the fairness of ECI in question SEDI News

Crowd of devotees in Tirumala. 12 hours for Srivari’s darshan.SEDI News

Death is better than slavery, people should wait for the next call, Imran Khan – daily Ausaf SEDI News

Medicine : Beware! Did you see ‘this’ red line before taking the medicine? Learn about Rx… SEDI News