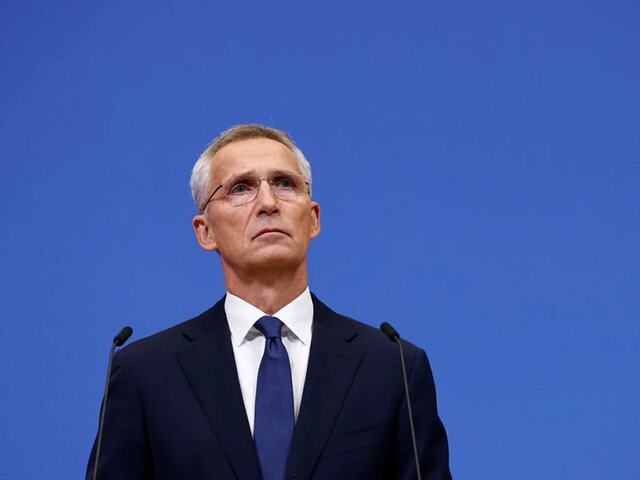 BRUSSELS: NATO on Friday accused Russian President Vladimir Putin of instigating the “most serious escalation” since the war in Ukraine began, but said it would not succeed in stopping the alliance from backing Kiev.

“We have a combination of reckless, dangerous nuclear rhetoric and then the consolidation in Russia, with today’s illegal annexation or attempt to annex parts of Ukraine,” NATO Secretary General Jens Stoltenberg said.

“Together this is the most serious escalation of the conflict since its inception and President Putin’s objective is to prevent us from supporting Ukraine. But he will not succeed,” he told a news conference.

He was speaking after Putin announced Russia’s annexation of part of Ukraine at a Kremlin ceremony, vowing that Moscow would prevail in its “special military operation” against Kiev, even as some of its troops faced possible defeat.

Putin announced the annexation of Ukrainian lands at a Kremlin ceremony

Putin’s declaration of Russian rule over 15% of Ukraine – the largest annexation in Europe since World War II – has been firmly rejected by Western countries and many of Russia’s closest allies.

Stoltenberg said Russia’s move was “the biggest attempt to seize European territory by force since the Second World War”, adding that an area roughly the size of Portugal was “illegally occupied at gunpoint by Russia”.

“The sham referendum was engineered in Moscow and imposed on Ukraine in total violation of international law. This land grab is illegal and illegal.

“NATO allies have not and will not recognize any of this region as part of Russia,” he added. “We call on all states to reject Russia’s blatant attempts at territorial conquest. These lands are Ukraine.”

He said NATO was not a party to the conflict, but reaffirmed its “unwavering support” for Ukraine’s independence, sovereignty and territorial integrity and would continue to support the country in defending itself against Russia.