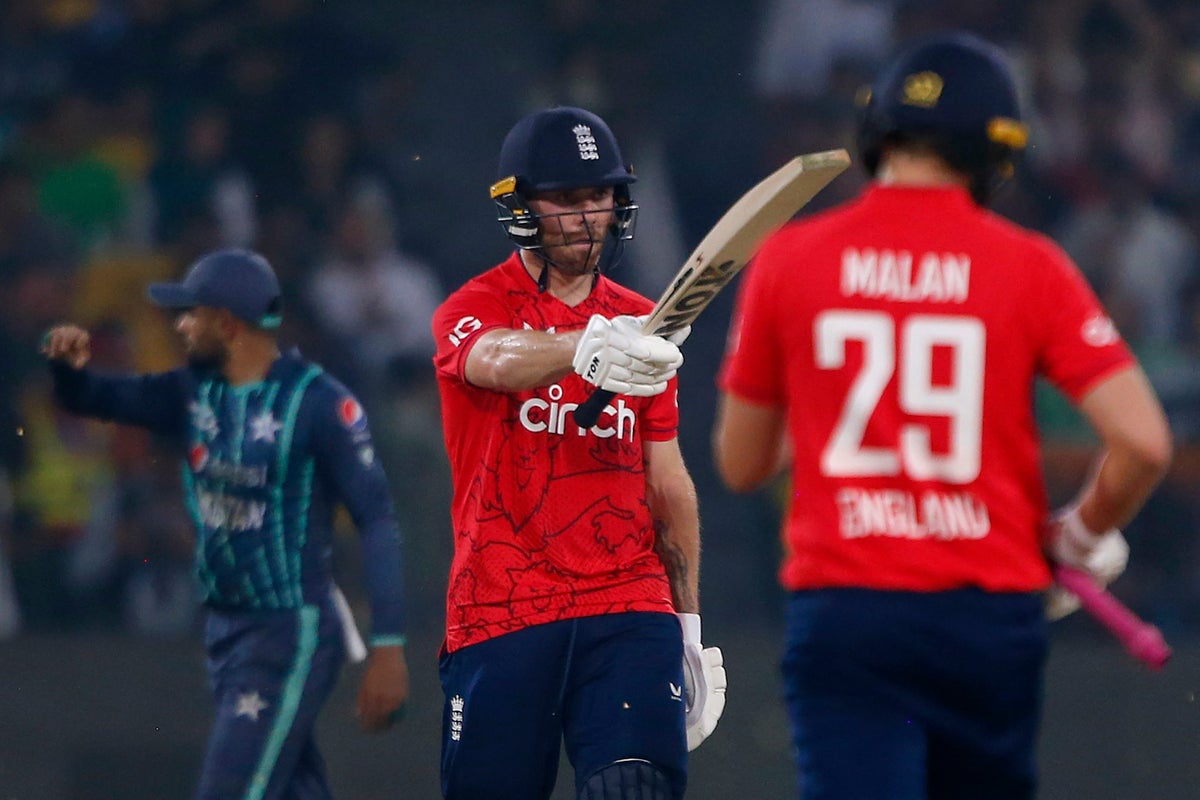 Phil Salt blasted Pakistan with a punishing unbeaten 88 as England took their seven-match Twenty20 series to a decider.

A win was needed to level the scores at 3-3, and with two consecutive unsuccessful chases under their belt, the tourists won by eight wickets behind the brilliance of Salt.

Facing a target of 170, Salt chipped away in style to make the difficult target look unbeatable. The Lancashire opener hit three sixes and 13 fours in a 41-ball stay, easily eclipsing his previous highest score of 57 in the format.

With everything on the line in Lahore on Sunday, the tour now moves towards its conclusion.

The first ball of England’s chase set the tone but it could have gone either way, Salt hitting Mohammad Nawaz for four but only after he edged close to the catcher at backward point.

A whip through mid-on had less risk for equal reward but the scoring was just beginning. Salt and Alex Hales scored 22 in the second over, matching each other for strokes with a six and a four each off Shahnawaz Dahani.

Mohammad Wasim was called upon to stem the flow and another 17 was dispatched, including three fours in a row from Hales, who hung back and hit the short stuff and drove hard as the length progressed. England scored 50 in the first three overs and set a tempo that dramatically reduced the required rate.

Shadab Khan temporarily stopped the carnage when Hales (27) skied the top-edge to chase another big hit, but Salt could not be contained. He pumped Nawaz down the ground four times in five deliveries, slamming the rope thrice and clearing it once.

There was no turning back for Salt, who scored England’s third-fastest half-century in just 19 balls and then punished Amer Jamal with a pair of cracking pulls. David Malan played well for 26 but was fouled by a low grubber from Shadab.

By the halfway point of the chase the result was a formality, with only 41 more needed. Ben Duckett ended Salt’s hopes of a century with 26, but allowed his partner to claim the winning run with a 33-ball unbeaten run.

Pakistan had earlier scored 169 runs for six wickets around Babar Azam’s unbeaten 87 runs. The captain shouldered the burden in the absence of his usual partner Mohammad Rizwan – officially rested despite his tepid form – and lived up to expectations.

Babar was a class apart from the rest of his team, hitting three sixes and seven fours off his 59 balls, as he gave the hosts a chance to push for an unassailable 4-2 series lead.

Rizwan has been a constant thorn in England’s side and without him, the Pakistan Powerplay got off to a false start. The pressure started to build early, as both Reece Topley and David Willey worked cheap opening overs, and early wickets fell quickly.

Rizwan’s replacement Mohammad Haris, whose shoes felt too big to fill, managed a clean hit for six before misjudging his angles and driving Richard Gleeson straight to short third-man.

Shan Masood was behind, trapped at the crease as Willy rapped his knee-roll, and led Babar into the path. The skipper responded by sending three of his next four balls to the boundary, taking the innings to 40 for two at the end of the powerplay.

Babur eased himself into his usual rhythm but needed the support of the middle order. He managed a stand of 47 and 48 with Hyder Ali and Iftikhar Ahmed, but Sam Curran’s gutsy performance halted both partnerships.

The all-rounder took two wickets for 26 and stunned Pakistan with a selection of mildly deceptive short balls and cutters. Basket saw strong figures demolished by 19 deliveries in the last over, but in inspired form with salt still a drop in the ocean.