Zealot Murder. The family of the dead young woman and ordinary people have also raised questions about the role of the police. Allegedly, efforts were being made to cover up the entire incident, as he was the son of an influential leader of BHR. 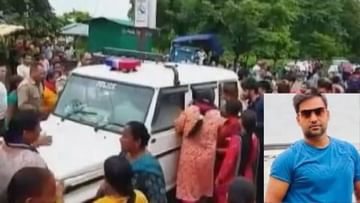 Protest action around the police car. Accused in tab.

Haridwar. BJP leader’s son arrested for murder of 19-year-old girl Uttarakhand BJP leader Vinod Arya’s son Pulkit Arya has been accused of murdering a receptionist at his resort. He was arrested on Friday when the accused confessed to the murder during police interrogation. The incident took place in Pauri district near Rishikesh in Uttarakhand. According to police sources, apart from the BJP leader’s son, two other employees of the resort are involved in the murder. They were also arrested.

It is known that the young woman had been missing since Monday of this week. Worked as a receptionist at a resort in Pauri district. Accused Pulkit Arya started looking for the young woman after she did not go to work on Monday and filed a missing diary at the police station. Later, the missing diary was also compiled by the family. But they had doubts about Pulkit Arya from the beginning.

On Friday, the young woman’s disappearance and allegations of police inaction spread across social media. Upon reaching the resort, Pulkit and two youths working at the resort confessed to killing the missing young woman. After that they were arrested. While taking the accused, the police had to face the protest of local residents. Local residents wanted to kill the accused, that is the complaint.

According to police sources, the accused said during interrogation that they killed the young woman and threw her body into the canal. Sources claim that Pulkit and his assistants were trying to force the young woman into prostitution. When he refused, they killed him and stole his body. So far, the body of the young woman has not been found. The police are searching the nearby canals and rivers.

Meanwhile, the family of the dead young woman and ordinary people have also raised questions about the role of the police. Allegedly, efforts were being made to cover up the entire incident as he was the son of an influential BJP leader. Accused Pulkit Arya’s father Vinod Arya was earlier a minister. Although he is not currently a member of the cabinet, he has considerable influence. It is known that Pulkit’s grandfather Ankit Arya is also a BJP leader.

State police chief Ashok Kumar said about the whole incident. “The place where the resort called Banantra is located does not come under the general police station. All these areas have patwari system for taking FIR of crimes. This resort is located at a distance of about 10 km from Rishikesh. The owner of the resort himself lodged an FIR regarding the disappearance of the young woman. As soon as the district head sent us the case yesterday, we started the preliminary investigation and arrested the accused within 24 hours. Further investigation is ongoing.” State Chief Minister Pushkar Singh Dhami also said that strict punishment will be meted out to the accused.

The loved ones are not dropped, they are raised…Learn from the ignorant creatures; Watch 10 Viral Videos SEDI News